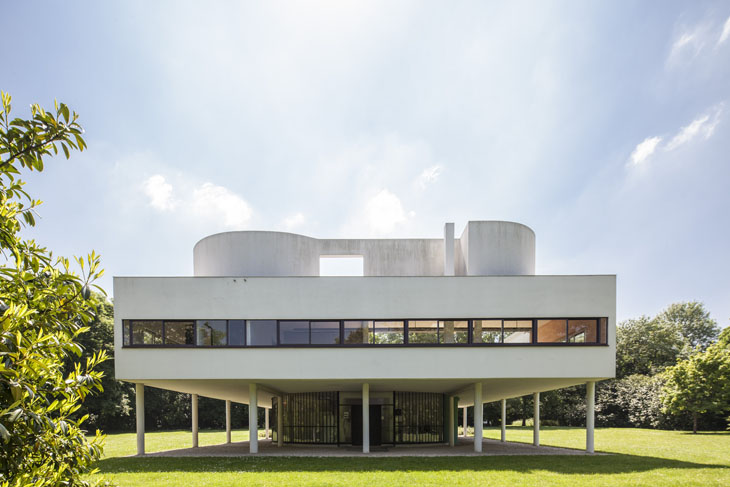 The ‘White Box’, as it is now so often referred to, is the sweeping skin-deep description of Modern Architecture. Many times a true observation, but the movement is rich in theory, structural, material and spatial innovation and social ideals. This White Box architecture dominated the early twentieth century revolution of building design and changed the face of both the urban landscape and the luxury single dwelling. The specifics of Modernism took root in the Bauhaus School, a school of artistic design which focussed on standardisation and mass production. The Bauhaus was directed by Walter Gropius, who, as well as Ludwig Mies van der Rohe and Le Corbusier, worked with Peter Behrens of the Deutcher Werkbund—which sought to artistically enhance the design of everyday products for industrial scale. The Dutch De Stijl publication also had a profound influence on Modern architecture with its communication of the ideas of Neoplasticism.

The ground for these roots of Modernism was the transformation of a predominantly rural society to the heavily industrialised urban city as well as the sudden technological changes in construction which brought on modern and often mega structures such as train terminals, bridges and engineering feats in particular the Eiffel Tower and Crystal Palace. Steel frame and glass technology was employed not only in civil engineering but by the architects of the great Gothic Revival, Neo-classicism and Art Nouveaux movements which were caught in a tug of war between modern society and the historical precedents of decadent eras. These architects decorated their structures with traditionally crafted stone and stained glass. They harkened back to values of Eclecticism in an attempt to disassociate from the polluted and increasingly machine-driven world. This chasm called for a new expression in art and architecture bringing a revolution in art culture towards functionality, rationality and universality.

In this period of architecture, the focus on functionality and a rational use of materials brought to the forefront the structure of buildings and the elimination of ornament. The formerly hidden armature was put on display and the materials thereof were exposed in their minimal state: I-beams were visible; concrete was simply painted. Houses were designed in open plan for flexible living and the mass of former styles was replaced by the light, bright and transparent. Villa Savoye and the Barcelona Pavilion, two contemporary buildings of the late 1920s, encompassed these characteristics along with the values and ideals of Purism and Neoplaticism. Mies van der Rohe, the architect of the Barcelona Pavilion (1929) worked for Peter Behrens for three years from 1908 and Villa Savoye’s (1928-31) Le Corbusier worked with them briefly in 1910. Both architects found themselves practising during this time of new expression and new technology and both buildings hold many similarities in structure, form and social ideals. There are also differences: Villa Savoye is seen today as the pioneering building of High Modernism. It is austere and machine-like whereas the Barcelona Pavilion is luxurious and lavish, and has affinities with Art Deco. Fundamentally similar, but also fundamentally different, these two buildings embody features that are so valued and esteemed in Modern architecture that the style has since become as prevalent as the White Box.

The artistic movements behind Villa Savoye and the Barcelona Pavilion are similar in theory, but manifest in different ways, as can be seen in the buildings’ form and floor plans.

Purism, one of the founding movements of Modernism, was established by Le Corbusier and Amédée Ozenfant. Much inspired by Le Corbusier’s Voyage d’Orient, where he studied Classical architecture and likened the elementary parts of the Pantheon and others to standardised mass produced parts, Purism simplified objects to their most basic geometric forms. It stripped objects of detail and ornament and embraced the machine. The austerity of this art—the simplified forms of the cube, cone, sphere, cylinder and pyramid was what attracted Le Corbusier:

‘Architecture is the masterly, correct and magnificent play of masses brought together in light. Our eyes are made to see forms in light; light and shade reveal these forms; cubes, cones, spheres, cylinders or pyramids are the great primary forms which light reveals to advantage; the image of these is distinct and tangible within us without ambiguity. It is for this reason that these are beautiful forms, the most beautiful forms. Everybody is agreed to that, the child, the savage and the metaphysician … ’

The Villa Savoye, constructed of these simple forms brought together in light, is a convincing example of the theories of Purism. The main body of the house is a cube (almost), the slopes are prisms and the solarium a cylinder. There is no physical ornamentation but beauty appears as sunlight is allowed to flood through the white, weightless and transparent building. The standardisation and machine values of Purism are also evident: Le Corbusier uses only new techniques, elements are repeated and the structure was the Maison Dom-Ino, designed as the standard type, adaptable to any arrangement.

Although contained in a square, the plan of Villa Savoye emphasizes the universality of the De Stijl movement. Le Corbusier employed rooms, but designed them in such a way that inside became out, solid became void and light became dark. Subtle details such as the walls of the house extending around the roof terrace, ‘windows’ in these external walls, the lack of distinction between floor levels of interior and exterior and the colour white used almost universally blurred the boundaries of traditional domestic living.

Unlike the framed plan of the Villa Savoye, Mies’ Barcelona Pavilion when viewed in two dimensions is a clear adaption of the De Stijl Neoplasticism. Where Corbusier seemed to think more in terms of volume, Mies’ design was of the vertical and horizontal. Whilst still adhering to strict geometry, Neoplasticism rejected curves: each linear element was to stand for something in and of itself, available to continue on, without converging with another. Thus the idea of traditional rooms was dispensed with. The vertical and horizontal elements of the Mondrian-like floor plan were extruded to create the volumes of the space. Internally, there are therefore no walls—only screens or partitions which could denote a change in function.

The boundaryless space of the Barcelona Pavilion allows for flexibility. This was the ultimate open-plan, one step further than the blurred rooms of Villa Savoye. Mies emphasizes even more the interchange between function and space, upholding the vital theory of De Stijl: universality.

As well as adhering to Purist and Neoplastic principles, both buildings are in some ways Neoclassical. The Barcelona Pavilion is set on a crepidoma with a diagonal entrance—typical of classical architecture. Its structure is an eight column grid and traditional materials are used throughout. The Villa Savoye is structured on pilotis reminicient of classical columns, as are the geometric shapes of cylinder and cube. Le Corbusier himself described it as having being part of the ‘Virgilian dream.'

Perhaps the greatest similarity in both buildings is their column-like structure. It was based on the principles of Maison Dom-Ino, the standard type for mass housing designed by Corbusier in 1914 and embodies the Five Points of Architecture set out in Vers un Architecture (Le Corbusier, 1926). The Five Points allowed for a free plan and façade through the use of structural pilotis. Walls became non-loadbearing, extensive fenestration was possible and nature was compensated by a roof garden. Villa Savoye was the success story of these theories. Reinforced concrete floor slabs could be arranged at any point on the pilotis. In this house, the main floor was raised up giving the impression of a floating box. The free plan and façade was what gave Corbusier the opportunity to create an unconventional layout and he used long strip windows across thin membranous walls resulting in a light and airy house.

Mies’ courtyard houses adopted the Maison Dom-Ino structural idea. Although single storey, the Barcelona Pavilion consists of floor and roof slab and thin columns that take the full load which solved the problem of economy and flexible function:

Today the factor of economy makes rationalisation and standardisation imperative in rental housing. On the other hand, the increased complexity of our requirements demands flexibility. The future will have to reckon with both. For this purpose, skeleton construction is the most suitable system. It makes possible rationalised building methods and allows the interior to be freely divided.

Mies fully made use of his former colleague’s structural design. Again, he goes one step further than Corbusier: the free façade is dismissed for no façade whatsoever. The space is continuous, from one edge of the site to another. Only the line of the roof and the marble floor denote the boundaries. The attenuated and reflective columns almost invisibly support the roof under which the slender screens seem movable. Although structurally alike, Le Corbusier’s intention was to pronounce and beautify the structure, whereas Mies’ delicate play on the Maison Dom-Ino design lets the mechanics fade into the background and instead used a wealth of opulent materials to create an ethereal and Suprematist atmosphere.

The choice of materials is the dividing factor of these two Early Modernist buildings. Le Corbusier adhered to the modern machine products of reinforced concrete and glass while Mies used traditional and lavish stone including Tinian marble, onyx and travertine as well as modern chrome and tinted glass. The highly polished stone and chrome cross-formed columns, the water of the two small pools and the extensive use of glass, flooded by light, create reflections distorting what is really a simple layout and the use of colour is reminiscent of Suprematist paintings evoking depth and feeling. Akin to Art Deco, the Barcelona Pavilion doesn’t shy away from extravagance. It does however maintain the natural quality of each material. Stone is laid as large blocks or tiles, whereas Art Deco tended towards decorative mosaic or cut out shapes.

In contrast, the finish of the Villa Savoye is whiteness:

‘[the] … home is made clean. There are no dirty, dark corners. Everything is shown as it is. Then comes inner cleanness [sic], for the course adopted leads to refusal to allow anything at all which is not correct, authorised, intended, desired, thought-out: no action before thought. Once you have put Ripolin on your walls you will be master of yourself. And you will want to be precise, to be accurate, to think clearly …’

The beauty of this house is the light falling on geometric volumes, enhanced by whiteness. Le Corbusier takes a clinical, functional and rational view of the finish, but it is the crowning quality of the architecture. Sunlight and shadow cut across the plain geometry creating a world of monochrome. The building has a great impact on its users. As well as the play of light, one is pushed and pulled through the space, much like a part of the malleable concrete and surprises appear at every corner.

Both buildings intend to evoke feeling, the Modern view that architecture could ‘touch the heart,’ one in a lavish and expensive way and the other with austerity. For all of Le Corbusier’s severity and a strict adherence to minimalism and machinery, his ingenious design is surprising and delightful. He created a powerful journey which he refers to as the architectural promenade. It is a relatively economical structure, the adaptability of which is valuable today. In the Barcelona Pavilion, Mies van der Rohe used this structure to its extreme but he was more unconventional in layout and style. His lavish use of expensive materials was the greatest distinction from the architecture of Le Corbusier. The two buildings are in many ways similar, but Le Corbusier was the master of Modernism and the Villa Savoye his masterpiece. It cannot be said the the Barcelona Pavilion is as purely modern, due to its traditional materials, but both houses changed the direction of architecture forever, showcasing concepts and techniques which can be found in the greatest office block or smallest residence of today.

And the Winner Is...